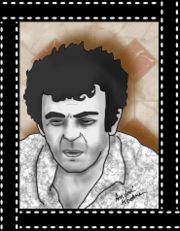 Yesterday i saw a documentary movie about Glauber Rocha, a great brazilian film director, actor and writer, he see in films a medium to express whatever he wants (political, mysticism, folklore, etc) in an artistic way (it's more like a movie poet) but in the other side he totally disagree's with the common (and sometimes boring) narrative of the comercial movies because for him films are to see and listen, to see and listen... and just telling a history in a film it's just a waste (that's something that i totally agree...)

Popular posts from this blog